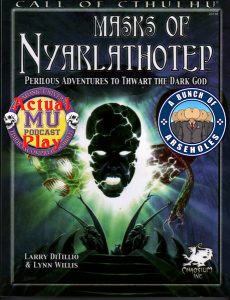 The classic Call of Cthulhu campaign is being played by a group assembled by Keeper Murph. Who will survive this notoriously deadly campaign? Will they defeat the machinations of the Crawling Chaos? Will they make it through the locked door? Tune in and find out!

Meet our cast, collectively known as: “A Bunch of Arseholes”

The group has their own web site where game notes can be found: www.abunchofarseholes.com Be aware that the notes are for the use of the play group, and they are further along in the campaign than these releases. Thus, there are spoilers for the future of this campaign. Discuss on the Campus Forum.]]>

Latest from the MUP Campus Forums

Arkham, MassachusettsApril, 1925A new member joins the "Strange but True!" team to investi

Fort Niagara, New YorkJanuary 6, 1760With their fellow soldiers starving, the party must find the fo