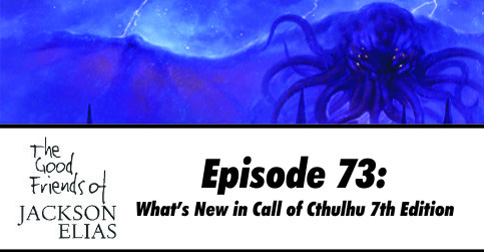 The Good Friends of Jackson Elias are back, and we're talking about Call of Cthulhu 7th edition again.

To be specific, we're not being specific. Instead, we're giving a quick overview of what changes you'll encounter if you're used to earlier editions. We've spoken about some of these topics in detail on earlier episodes, but we've completely neglected to give a summary until now. Hair shirts and (non-recreational) self-flagellation all round.
Last edited by Scott Dorward on Tue Mar 15, 2016 2:52 pm, edited 1 time in total.
One of The Good Friends of Jackson Elias
Top

I thought I'd heard from somewhere (an early Yog Radio podcast, an interview with Sandy Petersen on a blog?) that the monster's status of Independent Minor Race, Servitor, Great Old One, etc was intended to make the spells for Summoning and Binding generic to a class of being.

If that's the case, I'm glad this version of the idea didn't make it into the actual game books. I wish I could remember where i'd heard this...

As one of the backers of the Kickstarter, my frustration with the delays in printing has kept me from reading over the PDFs beyond the initial scan I gave them however long ago they were given to us. Your non-specific overview has piqued my interest again, especially regarding the combat and chase sections. Thanks for that!

The PDFs will shortly be given space on my tablet so I can begin a deep dive.

I don't think I ever used those categories for anything myself. I wonder if anyone did.

Maybe it's a bit early in the day, but I'd love to hear about ways to tweak the system a bit, towards or away from two-fistedness.

Where Yig doth tread no man treads tomorrow.
Reeking death, harvest of humans in hatred.
Suck on the shitbag of what you created, what we created.
Yig now incoming, Yig now is here.
Yig he makes everything impossibly queer.
Top

Tore wrote:Maybe it's a bit early in the day, but I'd love to hear about ways to tweak the system a bit, towards or away from two-fistedness.

Towards is easy: use Pulp Cthulhu when it comes out.

Seriously, for a fairly small set of mods, Pulp Cthulhu transforms the game into two-fisted, weird action adventure. Some are as simple as doubling the number of hit points and getting rid of the ill-effects of major wounds, making characters much more resilient. Characters also gain a lot more luck, and can use it for additional things, including surviving certain death and powering special abilities.

We're planning an episode about pulp/purist play to tie in with the release of Pulp Cthulhu later this year, so we'll definitely go into these things in more detail then.
One of The Good Friends of Jackson Elias
Top
Post Reply
4 posts • Page 1 of 1