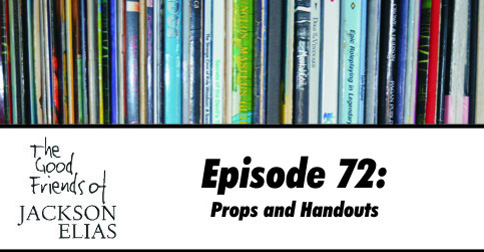 The Good Friends of Jackson Elias are back, and we're taking a look at props, handouts and other things a GM can show players at the gaming table without ending up on a register.

This is partly a discussion of interesting ways in which to use props and handouts, partly an opportunity for us to wax nostalgic about cool ways we've seen them used, but mostly a chance for Paul and I to marvel at just how much work Matt puts into such things: there is much talk of the merits of lamination.

Thanks to some exceptional generosity from our Patreon backers, we also have two bouts of singing this episode. “Bouts” is probably the best word, although assaults, eruptions and affronts also come to mind. If you have a better description, please let us know!
One of The Good Friends of Jackson Elias
Top

*Raises hand* My name is Anthony, and I'm prop and handout junkie.

For me, great props and authentic handouts really draw me into a game; it's worth saying though, they're not actually essential.

Many moons ago, I used to sometimes run games in my parents shed, a big, eerie thing that you could fit 10-12 people into, and in said shed was an old bureaux/writing desk. During one of my very early forays into the world of Cthulhu, I guess mid-eighties sometime, I had the idea of actually using the desk as part of the game. I set it up like the desk in the scenario I'd written; hid things in the desk where they were in the story, and duplicated the items in the desk.

Come the point in the game where the players were in the study and announced they were going to search the desk, I proudly indicated the actual desk and suggested they 'search away'.

The first thing, the literally first thing they found was an old receipt for candles .. That I had not put in the desk.

It was tucked away in one of the drawers at the back and, despite my protestations, the players began hunting down candlemakers all over the game world.

These days I would just switch tack and adjust accordingly, as a callow teen I floundered horribly for a while.

There is probably a moral here somewhere, but I cannot put my finger on it!

On a more practical note.

If I am running a campaign that is puzzle heavy, I break the clues down into 'table' clues and 'downtime' clues. Anything simple and/or imperative I give the players in session; anything more complex like cyphers etc I tell them about and put it into a shared Dropbox folder. The players can then spend as little, or as much, time they want to in solving the puzzles between sessions.

That helps keep the balance a bit.
Ant
Top

KeeperAntUK wrote: It was tucked away in one of the drawers at the back and, despite my protestations, the players began hunting down candlemakers all over the game world.

Rub-a-dub-dub,
Three men in a tub,
And who do you think they were?
The butcher, the baker,
The candlestick-maker,
They all sailed out to sea,
To summon hideous blasphemies from beyond time and space.
One of the Good Friends of Jackson Elias (a Call of Cthulhu podcast)
Top

Desks are stranger than fiction.

Where Yig doth tread no man treads tomorrow.
Reeking death, harvest of humans in hatred.
Suck on the shitbag of what you created, what we created.
Yig now incoming, Yig now is here.
Yig he makes everything impossibly queer.
Top

There's definitely potential for a Cthulhu scenario about a sinister conspiracy of chandlers, making candles from tallow rendered from extradimensional entities. These candles would be dangerous enough when used correctly in rituals, but what happens when a chandler mixes up a couple of batches, selling eldritch candles to unsuspecting customers. That nice candlelit dinner you have planned will be a lot less romantic when the candle smoke starts coalescing into something twisted and ravenous.

Damn, I want to write this now and call it "Curse the Darkness".
One of The Good Friends of Jackson Elias
Top
Post Reply
6 posts • Page 1 of 1