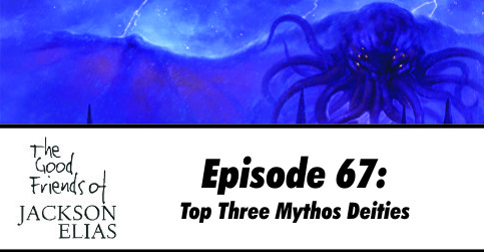 We're back, and we're evoking abominations from beyond space and time! As that could cover most of our activities, however, I should be more specific. This is our discussion about our favourite Mythos deities, what makes them interesting to us, and unusual ways to bring them into your Cthulhu games.

Be warned that there is singing in this episode. A generous Patreon backer has given us $5 per episode, and we have rendered his name in chants that make the air itself bleed. We offer no guarantee that listening to this will not transport you to the court of Azathoth, where twisted abominations cavort and play blasphemous songs on instruments made of pure madness. On the bright side, they sound better than our singing.﻿
One of The Good Friends of Jackson Elias
Top

I just listened to it again. The singing was particularly unsettling this time around.

My top 3 gods (without giving it too much thought).

3: Nyarlathotep
So many possibilities. He can be a dark Messiah, the Devil at a black mass, any number of alien critters, and a Mystery Man (from The Book of Unremitting Horror). You can play with the idea of an alien deity who DOES take an interest in you.

2: Cynothoglys
Not one of Lovecraft's, but I'm allowed. I used the name in a (largely ad-libbed) scenario, and Cyno became a god of "sad, mouldering strangeness" which attracted the lonely and lost. I'm rarely satisfied with my own GMing, but that was an exception.

1: Hastur
I like the idea of the forbidden play, the doomed alien city with the empty mystery at the center. I like the way Hastur gives me an excuse to turn the world into a surreal mystery play. I like that a Hastur scenario doesn't need to have Hastur in it. Everything gradually becomes Hastur.
Where Yig doth tread no man treads tomorrow.
Reeking death, harvest of humans in hatred.
Suck on the shitbag of what you created, what we created.
Yig now incoming, Yig now is here.
Yig he makes everything impossibly queer.
Top

I don't know I think they should post it on iTunes has a Single Holiday song.
Sam Stamps
Keeper of my own little reality.
Top

I'm all for that.
Where Yig doth tread no man treads tomorrow.
Reeking death, harvest of humans in hatred.
Suck on the shitbag of what you created, what we created.
Yig now incoming, Yig now is here.
Yig he makes everything impossibly queer.
Top

Very much enjoyed this episode, not simply for the Protodimension Magazine plug and the main subject matter but also for the Trap Door references

Although the magazine has fallen horrendously off schedule we WILL be back soon with the oft-delayed issue 24.

Cheers chaps, see you at Continuum if not before!
Lee Williams.
The Dark Times Fanzine
"There is more to darkness than the sun going down."
Top

Great show guys & wanted to share some thoughts which you may or may not have read.
*For Mordiggian, whom I've not yet encountered in a game, sounds a lot like the people who wrote the Dr. Who episode "Silence in the library" got some shared fictional DNA in between that show & Mordiggian.

*Azathoth & your descriptions if it was around in cult form reminded me a lot of Roger Corman's "Masque of the Red Death" film at the end. Oh and as for the other ideas on Azathoth, listen to the following bit of Role Playing Public Radio with Tom Church's scenario Divine Fire (link goes to part 1 & then part 2).
http://actualplay.roleplayingpublicradi ... es-part-1/
http://actualplay.roleplayingpublicradi ... es-part-2/

*Nyarlathotep - I also like the small cameo I believe he has in one of the core scenarios in the 6th ed book (Dead Man's Stomp). Am I the only one thinking of Nyarlathotep when watching the 1990s horror film with Christopher Lee "Funny Man"?

*Shub-Niggurath - very fun & love the idea of the alien paradise or circus, easy to throw in something with the 'milk' (used heavily in the Age of Cthulhu scenario) or going into the Ken Writes about Stuff issue of the Dark Young to throw in all kinds of natural oddities or make up your own like using all cactus or seaweed for one.

*Cthulhu - want to say in the old book found recently (Cthulhu Now from Chaosium) there are some pretty wild scenarios plus a great little bit of research on forensics from Victorian times to now worth reading (will have to raid the references for it & put here later for all to research & enjoy), anyway one scenario in there is using the big C & it's dreams that many might not have tried & looked like it could easily send it back to the 1950s or earlier with more fantastic technology

* Bast - I'll have to look up her with Bloch as I must have missed those but she's a favorite here with me, even got one scenario somewhat written as an introductory scenario but fell a little flat that has a fun moment I'll find a way to put into another scenario using a small cult of Bast. Also Call of Cathulhu is out there & some actual plays on Role Playing Public Radio where you might run into Bast more while playing curious cats.

* Hastur is one of the near favorites here until reading 'Soldiers of Pen & Ink' for Trail of Cthulhu. You want to throw the mythos into something wild & chaotic? How about the Spanish civil war? Also not going to spoil it more but you not only can meet Hemmingway but a chance to recruit him to help is quite a fun note in that one. Plus also in Trail is the Repairer of Reputations scenario too I have yet to read but should be quite a treat.
"That's funny, usually the blood gets off on the second floor." -Mr. Burns in The Shinning episode (Treehouse of horror V)
Top

If you thought the singing was unsettling this time, wait until you hear what Paul has done in episode 68. I'm still sick and trembling.
One of The Good Friends of Jackson Elias
Top

fox01313 wrote:Great show guys & wanted to share some thoughts which you may or may not have read.

Oh wow! Thank you! Those are some great pointers and references.

I remember seeing Funny Man back in the nineties, and now you mention it, he is totally an avatar of Nyarlathotep.
One of The Good Friends of Jackson Elias
Top
Post Reply
8 posts • Page 1 of 1