by Zilo_edsel
this is the first time i've posted, and will soon be the first time I run CoC. Im not sure if this is were I should be posting this,but hopefully it is. I have a few years of DMing under my belt, so I Know the basics of story telling and messing with players.

I've decided to run Deadman stomp. i think i can make it fun, though apparently opinions are split on it. anyway I have this Idea that narleythope has masqueraded as most of humanity's gods at one point or another, and also their heralds.

I mention this because as soon as I read about the trumpet that brings the dead back to life, I thought of Gabriel's trumpet that will raise the dead on the day of judgment...and if Narl had it...who was Gabriel?

Im not sure how i would revel that to the players, but when i do i should think it would a mind bending revelation, as it implys that at least one religion was, at the least, manipulated by an outer force. at worse it implys its all a joke played on humanity by a bored sociopaths god. ( its the second in the game)

I have this idea that Narl loves humanity because we are so close to being like him beings of chaos and madness,
he doesn't really want the GOO's to rise since it would ruin his plans to make himself playmates....

my reasoning is that unlike the GOOs,who are, to my understanding, evolved beings, albeit billions of years older and so diffrent that they warp the mind just to see them, Narly is a true immortal surving the OG Azathoth, who i understand in his madness created the universe.

Even a completely alien life form surely gets lonely especially after uncounted eons. While I know that Narly doesnt really care whether we die or not, he is still fascinated by something so like him, or at least with the potential to become like him. Plus he loves chaos since he knows that order is truly unnatural, in his alien mind helping humanity "break free" of the shackles of sanity, which are to him just silly dillusion, is helping elevate us as a species. Though what he thinks of as elevation we would undoubtedly think of as destroying.
For the Inscription Im thinking something like: "This is the horn of Gavri'el, messenger of God, also called Jibra'il, first in the angelic choir of Yasod, chief of the angelic guard, he who stands at the right hand of god."
This would of course just be part of the inscription, mostly telling them what they have.
Then I think it would continue: " and lo the lord gave unto his messenger a horn, granting Unto him the power to raise the dead, And the lord said unto him " use this on the day of judgment to resurrect the righteous that they may strike down the wicked, and make the plains run red with the blood of evil ones." Now what I really want is for it to be more ambiguous or even paradoxical in someway. Implying the corruption and evil that is really behind it.

I'm thinking I will use enochion which is as language developed by a philosopher and a spiritualist to speak to angels and has a fun alphabet and unique sound. I considered translating it into hebrew then into enochion but thats only cause im mildy crazy about little details.

I still am trying to think up stats for the trumpet as im pretty sure my players wont destroy the trumpet immediately (even if they could, if so it wont be easy).
What do you guys think? any suggestions?

1. Do not ever stop being mildly crazy.

2. Azathoth has mad pipers in his court to keep him amused. Maybe a tie-in opportunity?

4. Check out Ezekiel. Trippyest book of the Old Testament and full of Lovecraftian monsters.

5. Focus on creating a concrete and difficult choice for PCs, with both costs and benefits on each branch of the decision tree. Make choices clear, not ambiguous. Maybe short term gains (raise army of ghouls to defeat a Gug) vs. Long term consequences (ghoul army now infesting PC hometown indefinitely).

Sent from my VS985 4G using Tapatalk

by Zilo_edsel
those hard choices will be the hardest things to figure out i think.

I do like the idea of narls having a pipe that can actually control the new undead, and possibly being the only one who could use the trumpet to actually raise the dead back to full life, rather than zombie-hood. maybe raising zombies is only a few MP but true life takes like 20 or 30...a mortal could do it but it might just kill them

by Zilo_edsel
I'm also thinking that nearly will quote authors such as nietzsche. I mean look at thus spoke Zarathustra." you must be ready to burn yourself in your own flame;
how could you rise anew if you have not first become ashes?" Or "Man is something that shall be overcome.Man is a rope,tied between beast and overman - a rope over an abyss.What is great in man is that he is a bridge and not an end.” it just seems like the sort of thing a mad god would say in think that narlys flute will be a pungi, that is the snake charmers instrument I'll probleynfind a good videoor sound file d speed it up perhaps flipping it to provide a discordiante sound befitting the blind idiot god azathoth

by Dr. Gerard
I'd like to see and hear!

Sent from my VS985 4G using Tapatalk

by Zilo_edsel
well the hardest song to find something for was the title song deadman stomp, this one seemed to have a good mix of creepy and swing sound [youtube1]https://youtu.be/bVUyvwtHTnw?list=RDq2h7XqeLvpo[/youtube1]

And these are the runes on the trumpet 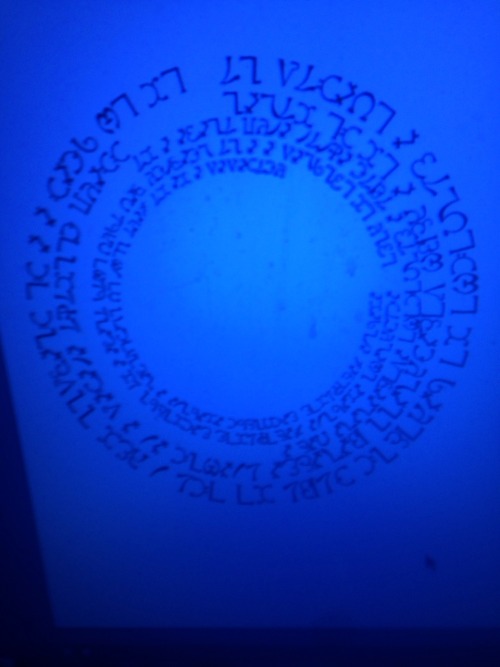